When it comes to dog issues you should be aware of, bloat is high on the list. Bloat in humans is harmless, but for dogs it can be deadly. Treatment for bloat is needed as soon as possible. Unfortunately, if you are away from home and your dog breaks into the dog food cabinet, death could occur if you are not there and help is not given, so its important to be sure dog food is absolutely out of reach and locked away so your dog can not get to it.

Bloat tends to happen more often with kibble because of the starches/carbs according to Dr. Greg Cook, DVM. Also, he mentions that any plant material that would cause excess gas would cause the stomach to bloat and then twist. This is why you should discourage your dog from eating grasses and plants in your yard or along the path where you walk.

The causes of bloat aren’t often known–and can just be a “freak” thing that happens, but the signs and symptoms are. Knowing what they are could save your dog’s life.

What is Bloat and Why Does it Happen?

Bloat, also known as gastric dilatation and volvulus, or GDV, is not completely understood by veterinarians.

“GDV is a condition where the stomach twists and then fills with gas,” says Dr. Anna Stobnicki, DVM, a surgical intern at WestVet, an emergency animal hospital in Idaho. “Or the other way around—no one is sure whether it bloats then twists, or twists then bloats. Eventually, the dog’s stomach becomes distended with gas and puts pressure on the diaphragm, which can cause breathing problems. Additionally, the pressure cuts off the return blood flow to the heart, Stobnicki says. The extreme pressure within the stomach can cause tissue to die leading to stomach rupture, and sometimes the spleen twists with the stomach, which results in damage to splenic tissues as well.

Although medical professionals have a lot of knowledge about bloat, there is a big missing piece—why bloat happens.

“There are several theories as to why bloat occurs, but ultimately it can be caused by a number of variables,” Quammen says. “Most commonly these are large [or] giant breed dogs, more often male than female, and middle-aged. Many of these dogs will have a history of drinking or eating a large volume and then being excessively active.”

Stobnicki says that great danes, large hound breeds, Saint Bernards, and standard poodles seem to be more susceptible to bloat than other breeds. Labradors are not generally known for bloat, and I have not personally experienced it much, except for the one time, 25 years ago, when a dog of ours found her way into the dog food closet and ate and ate. I luckily found her in time to rush her to the hospital and she was fine. But most RECENTLY we had a middle-aged dog, absolutely 100% good health, die of bloat in a boarding kennel. It is not known as to whether he ate a lot of food then had vigorous exercise (very common reason the stomach flips or twists) or not–or if he ate lots of plants and grasses in the play yard and  then bloated–so it’s a good reason to discourage high energy play immediately after feeding your dog.

“Even though bloat happens more often in larger breeds, don’t think you’re safe if you have a smaller dog. Dr. Lindsay Foster, DVM, an emergency veterinarian at the Milwaukee Emergency Center for Animals, says that bloat “has been reported in almost every breed.”

“Outwardly, bloat could look like a swollen stomach, with possible drooling, panting, and walking around or pacing,” Quammen says. “Some dogs will also make sounds to let you know they are in pain,” she adds.

Your dog may also try to vomit without being able to bring anything up.

If your dog has any of those signs, you must bring your dog to a veterinarian immediately.

What Should You Do if You Think Your Dog Has Bloat?

First of all, DO NOT ADMINSTER ESSENTIAL OILS IF YOUR DOG IS BLOATED.  This shuld never be done in place or emergency vet care. It can only worsen the situation or, if you think it will help, could do nothing and then your dog expires because of lack of medical attention.

If you suspect your dog has bloat, there’s only one thing you can do: get them to a veterinarian as soon as possible. Unfortunately, there’s nothing you can do to help at home. (You “could” try giving them hydrogen peroxide to induce vomiting–or attempt the Heimlich maneuver) immediately, but still head to the vet afterward.

After important steps like x-rays and bloodwork have been done and bloat has been diagnosed, surgery is the only treatment, Quammen says.

“The only way to treat it is to go into their abdomen surgically and untwist the stomach. The stomach is then sutured to the body wall to prevent it from twisting again. This is called a gastropexy,” Stobnicki says, noting that there can also be spleen issues that necessitate the spleen being taken out, as well as possibly part of the stomach being removed if the twisting is severe enough.

Sadly, even dogs who get treatment can die sometimes. Up to a third of dogs die despite surgery, Stobnicki says.

“The longer a dog is bloated, the poorer prognosis they have, so owners should not delay treatment,” she says. “Generally speaking, if they make it out of the hospital after surgery, they’re usually OK.”

What Happens After Surgery?

Like with any big surgery, you will need to keep your dog calm, still, and clean. The surgical site must be observed daily to be sure there is no redness indicating infection. You’ll also be given antibiotics and painkillers to take home with you. Give them exactly as directed.

Do not go back to your dog’s regular routine until your vet has given you permission to do so.

How to prevent bloat:

Changing to a low carb/starch diet is recommended. Click here for the veterinarian formulated non-carb loaded dog food one we recommend.

“Some veterinarians will recommend prophylactic gastropexy for at-risk breeds,” Quammen says. “This surgery is done on healthy animals to reduce the likelihood of GDV.”

Stobnicki says this preventive procedure is performed at her clinic. “I don’t necessarily agree with every dog going under anesthesia just to prevent something that may or may not happen, but in some cases, I think it’s appropriate,” she says. “For example, if I owned a great Dane, I would elect to do that with my dog.”

One of the easiest things you can do to prevent bloat is to incorporate a raised bowl:

If you are looking for a single bowl, we recommend this one. It is for large dogs–and attractive for your home (see below). Click here 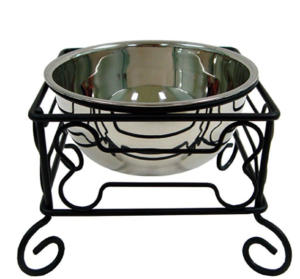 If you are looking for a double bowl stand to hold both food and wather, we love this one that adjustable to all heights (see below) Click here 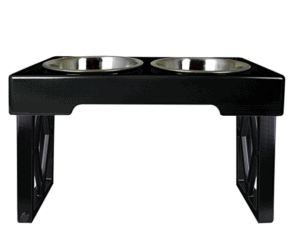